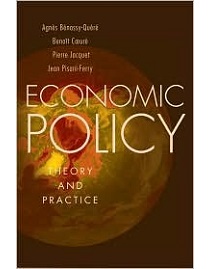 Is the inflation objective of the European central bank set too low ? Is European national debt excessive ? Is a fixed or floating exchange rate better ? Which taxes should be reformed ? Can the European standard of living catch up with that of the United States ? This book, a translation of a book published in French (de Boeck, 2004), brings precisely argued answers to these questions using rigorous economic analysis. The authors join together for the first time in one volume the fundamentals of the macroeconomic field with analysis of current debates in economic policy. They take the point of view of a policy maker who must intervene in one particular aspect of policy, and thus they put the reader at the cutting edge of the main issues, debates and challenges related to each policy aspect. Economic Policy explores in an open-ended way what various existing theories, macro and micro, have to say on these current policies, and points out the limits of each theory. Overall, it demonstrates to the reader how he or she can build upon the combination of existing theories and also on common sense in order to design adequate policy responses. The work will appeal to a large audience, including students in economics, management, and political science graduate schools, and professional economists and policy makers interested in issues in macroeconomics.