A scarcity of institutions for resolving conflicts

Francis Fukuyama, Professor at Johns Hopkins University, giving a speech on political institutions and conflicts during the Rencontres Economiques d’Aix-en-Provence 2006 “A World of scarce resources” 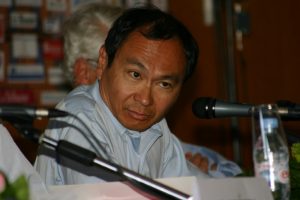 I am going to talk about political institutions, both on an international and a domestic level, because one of the greatest scarcities in the world today is actually a scarcity of institutions that provide for collective action and are able to resolve international conflicts. Now if you believe basic microeconomic theory, the market mechanism should resolve most conflicts over relative scarcities in ways that earlier panelists have indicated: rising prices indicate relative scarcity, decrease demand, increase supply. While the government does not need to intervene to correct the market under conditions of market competition, there are several conditions that merit a State intervention having to do with public goods and externalities. And there are obviously a lot of those related particularly to energy, but also to water and other natural resources. The one that has been on the minds of many people recently has to do with the problem of resource security: oil is produced in very unstable parts of the world,where there are a lot of political violent political conflicts. This is not just in Middle-East, but also in Latin America with the rise of Hugo Chavez and the energy nationalism.

In the Andean region there are now important conflicts between Bolivia and Chile, Bolivia and Brazil, in Venezuela, Columbia, and so forth. Second, there is a global public good of maintaining an international trading order that allows the market mechanism to work.And finally, you have negative externalities like build-up of carbon in the atmosphere, in which one country can do damage to other countries without necessarily being accountable for that damage. So all of those are theoretical justifications for intervention. Now the economist Mancur Olson in his book,The Logic of Collective Action, talked about the difficulties of achieving collective action, particularly when you have large numbers of players with diverse interests. The problem of public goods provision can be unsurmountable in many cases because nobody has the incentive to provide them. And the possibilities for free-riding by the other players in the system are very great. Olson argued that there are really two solutions to the collective action problem. The first was when you had a single hierarchical source of authority that had the power to enforce rules on all of the players, which is a situation that simply does not exist in international relations today.
But the second was a case in which one of the players was significantly larger than all of the others and had an interest in unilaterally providing those public goods and accepting free-riding by the other players in the system simply because there is no other way to achieve a collective action.And I would argue that in many respects, the provision of public goods in the cold war era was of this nature, done largely by the United States which had both an interest in maintaining an open trading system in the world, and in a security system, to protect itself and its trading partners. It permitted free-riding by, for example, becoming an export market of last resort to the fast developing countries of East Asia, and obviously provided security to its alliance partners in NATO and in the
Far East.And I would say, even to this day, by absorbing Chinese exports, and allowing this build-up of American reserves in Chinese hands, it has also contributed to global economic stability.
Now the problem is that this system is very difficult to maintain for a couple of reasons. First, that Americans have to be convinced that providing global public goods is in the American interest.And secondly, non-Americans have to believe that this unilateral provision of public goods is legitimate. And I think the Iraq war underlines the difficulty of both of those. Now I know that it is difficult for many Europeans to believe this, but I think that the Bush administration in approaching the intervention in Iraq actually believed that it was providing a global public good.That is to say they believed that weapons of mass destruction in an unstable region of the Middle-East would be highly destabilizing and that the collective decision-making processes would not fix this problem, and therefore the United States would provide that unilaterally. And of course, as we know very well, the international community did not find this legitimate, and did not accept this particular American logic. It was not simply a question of whether other countries believed that the United States was behaving in a disinterested matter, which I think they did not, but also there was not a high degree of confidence in the judgment of American policy-makers to carry out the policy. Unfortunately, in this respect, the war and its aftermath confirmed all of these fears. It’s one thing to be a benevolent hegemon, but to be a benevolent incompetent hegemon makes the world a fairly unstable place.

And so I think that we have got a big problem for the future. This pattern of the United States acting first and receiving legitimation only ex post I would maintain actually worked reasonably well during the cold war. But this unbalanced provision of public goods will not persist into the future, and I think you can see the problems that will continue to arise, just thinking about the possibility of Iran and Iran’s nuclear program and the like. So, what’s the solution? I think that, first of all, the global public institutions like the United Nations will continue to play an important role in peacekeeping and certain forms of nations-building, in certain forms of security. But for the most important and difficult ones that institution will not be able to resolve the conflicts of interest, for reasons that are built into the current system because the Security Council was deliberately designed to be a weak institution. The quest for legitimacy that underlies current efforts at UN reform are only going to increase the collective action problems. And therefore, my own preferred solution is a world that I would call a multi-multilateral one, in which we have a multiplicity of international institutions that are sometimes competitive and sometimes overlapping that deal with these issues on both a functional and a regional basis. And we can discuss this in the question and answer period further if you want some specific elaborations. I would just like to note at the end one important issue.Domestic level institutions in developing countries are also absolutely critical. And there is both good news and bad news there.The last time we had an oil shock in the 1970’s, the inability of institutions in Latin-America to recycle petrodollars and to deal with aggregate demand led to the Latin-American debt crisis, which set that region back for an entire generation.Today, by contrast, while you have energy nationalism in places like Venezuela and Bolivia, and instability as a result, you also have incomparably better institutions to manage precisely this kind of external shock, and I think people sometimes are unaware of the good news in terms of institutional development, in especially the larger countries, Chile, Brazil,Mexico, and the like.That is also an absolutely critical dimension of institutional development if we are to deal with a world of increasing scarcities.