Concordia is the daughter of Mars (USA) and Venus (Europe)

This speech was given by former US Secretary of State Madeleine Albright at Les Rencontres Economiques d’Aix-en-Provence 2005. 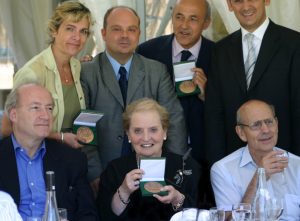 As everybody knows me, I am an optimist. But I think one can very well agree that the world is not in a great place. Also, I have never been to any conference, especially with economists that says that everything is going well… Otherwise there would be nothing to discuss.

As somebody who was born in Europe, I am a little schizophrenic because I worry about my children but I tell them to “go do it”.What we are supposed to do is really look at comparative attitudes towards transatlantic relations and what I thought I would do is give a few background facts, look at some specific situations and then look at things that we have to do together.

Now for my whole discussion, I have several provisos. In listening to everybody, we are talking as if there were one Europe.There is not one Europe, there are a variety of Europes. It can be divided into North-West, South and Central or Eastern or whatever division, but we have here been talking about one Europe and I do not think that is accurate. Also I think we have to understand that America is very complicated.We are one country, but everybody now knows about the Red and Blue, I can assure that not everybody agrees with President Bush and Richard Perle. Some in fact wish for bi-partisanship, I am one of those, and some like it the way it is. Those are my first two provisos. The third one is that there is a little bit of nostalgia involved and even though I think of myself as the embodiment of US-European relation having been born here and become a naturalized American, I have to admit that I did have a few problems with Europeans. And when my good friend Hubert Védrine and I used to get together for our tête-à-têtes, I at first started being very sentimental and I said “You know we really did have this great relationship and Lafayette and all that.”And he said: “Come on,Madeleine, you know that the only reason we helped you is that we also hated the British.”
And then I did in fact say that the United States was an indispensable Nation.
I believe that. And Hubert talked about an hyper-puissance et moi j’étais hyper-Madeleine. But it was all done in great fun. So my other proviso is, having been out of office, I have the following verity and that is that people who have never had the high level jobs do not know how hard they are and people who have left have forgotten.Then I have to say that it is very hard to be the United States. You are damned if you do, damned if you do not. If you do not act you are blamed for not taking part, if you do, you are aggressive. And then the final proviso is the following: it would be very nice if President Bush admitted that there were no weapons of mass destruction or connection between Saddam Hussein and Oussama Ben Laden.But it would also be very nice if everybody, including the Europeans, would admit that he was re-elected. So those are the provisos.
Now a few facts. I have been very honored to be co-chair of a very important American survey done by the Pew Charitable Trust and former ambassador Senator Jack Danforth does this with me so that it is a completely bi-partisan survey.
We came out with a sixteen country poll that was completed in may 2005 and questioned 17000 people, and eight of those countries are Europeans if you count Russia and Turkey. It involved the United Kingdom, France, Germany, Spain, the Netherlands and Poland. And only in Russia has our image gone up since last year. There are lots of different results from this survey. For the purposes here, the US image is still mostly unfavorable among allied publics and the EU skepticism about itself has not fueled any desire for a closer transatlantic partnership. And all European countries think it would be better if another military power rivaled the United States but not China. The US on the other hand increasingly values our alliances with Europe.According to this survey, we know we are disliked but 67% of our public think we consider other interests in creating our foreign policy and in contrast in France only 18% think that we care about what your interests are, 13% Poles and 38% Germans. So we are definitely seen as unilateral.American people themselves are viewed pretty well but we are very self-critical.What I found most interesting however is that the Chinese think we do not work hard enough! Now some of these differences are due to the fact that our governments and publics look at problems differently but as a professor, I often try to analyze how foreign policy is made in countries and what is very useful are five factors. 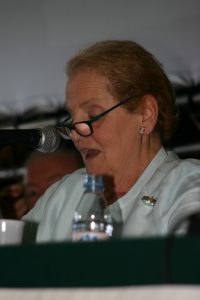 Briefly, the five factors are:
– the objective factors,what are the country’s resources,where it is located geographically

– the subjective factors, how do people feel about themselves,
– how the government is set up, executive legislative relationship, parliamentary,
– how the bureaucratic arguments take place, which is reflected in what the
budget looks like,
– the individuals.
Americans really feel that people do not appreciate us enough, that nobody thanks us for doing anything while we do think that we have the best system in the world and other people should just follow it. I think the Europeans on the other hand have some identity issues, have a sense about having fought enough wars and have a different approach at the time to their role. I would just like to point specially though to the government.
In our case,we are under one party at this point.The Democrats are in opposition everywhere and we are definitively weakened, we are in a one-party system in the United States. In Europe, I think it is more mixed as you look at the different countries.
Now the budget. We have a huge deficit, and I am very glad that Paul Wolfowitz said that he was encouraged by Gleneagles, but we have a large defense budget, that priority was made and the question is whether President Bush is going to be able to live up to what he promised at Gleneagles or if it is double counting.
So the fact is that these five factors are important and I will let you judge the issue of the role of individuals. Now, if we look at what our problems are, I think that the main issue is that we see the threats to ourselves differently.
We have different security threats on our minds. There is no doubt that the United States has terrorism on its mind and I disagree with something that Mr. Perle said, 9/11 was a massive divide for America in terms of its thinking. Now, I was born in Europe, I lived in London during the war, I know what it is like to be bombed and that is what makes me different from another American my same age. This was something for the American psyche and it is essential that people understand that.
So for us, the first priority is fighting terrorism, and the devil’s marriage between the shadowy groups and the availability of weapons of mass destruction… We have a different view towards the issues of nuclear proliferation, we have a different approach to the environment and energy. I am very happy that President Bush agreed that people have something to do with the climate but I think we see it differently in terms of priorities.
We have different priorities on the regions.We, at this stage, believe that the Middle East and the various problems in it are number 1 issue, whether it is Iraq, Iran or the Middle East peace process.We see China on the horizon Concordia is the daughter of Mars (USA) and Venus (Europe) and it is clearly important. Sad to say that Africa is a secondary issue to the United States.
Now also, and this was mentioned but it has to be underlined, we look at force differently, because we are the super-power and we have the responsibility, and frankly,Europe has the luxury of having been under an American nuclear umbrella with American forces.We also give the wrong signals. I know when we were in office, we wanted the Europeans to help, we were interested in the European force though we were worried about duplication. I thought we looked at sovereignty differently. The US cares very much about sovereignty. For us, it is not something of the past. I think the Europeans thought they did not care about sovereignty but it has come back and what I think is the strongest force in the world today actually is identity or nationalism. All that has been said. I would like to underline a point that I think every American has to make here is that we have much more in common than not.We believe in democracy, different forms, we believe in the free markets and we have similar traditions. So we need to figure this out. And I think Kosovo and the way Hubert and I and the other ministers worked on this is a perfect example.We figured out how to work in a pragmatic way, all of us keeping our interests. This is very important because it is an example of complete cooperation.
Now there is this saying about Americans being from Mars and Europeans from Venus. But you have to know your mythology. Mars and Venus actually got along pretty well.They had a number of children. One was Concordia, the goddess of harmony. So I think we have a lot to learn form each other.