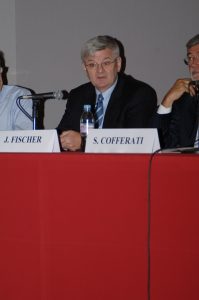 If you look at Europe today, it is a great success story. One generation ago, the continent was in a very different situation. It was war-ridden and divided by the Cold War. Today, Europe is a wonderful place, we have efficient market economies, democracy everywhere, with the integration of new member States – first the Mediterranean States and Ireland are great success stories – and now with the new member States in the East after the end of the cold war, I think we will repeat this success story. We have highly developed welfare states. By the way, I think we can be proud about that. I have lived in the US for nine months now, and I can’t see the benefits of their healthcare system. It’s more expensive and less efficient than the European one.

So, it is a success story overall. But on the other hand, Europe is not a success story in terms of our domestic policies. There is a broad feeling that we have serious problems and indeed Europe is losing in economic terms compared to Asia, East-Asia, South Asia and also to the United States.
So the question is: in the end, how strong will we be? And it is not a question of what kind of capitalism we want to have in Europe. The question is, what are our options? What kind of Europe do we want and how strong or how weak should this Europe be?
And the answer is very simple: in the real world, we are under pressure – not because Europe is badly managed, neither France nor Germany. Although we all have our problems, all in all, Europe is and will be a good place to live in. We are under pressure because the world outside is changing rapidly. So the impression is that we are under pressure or in a decline.

What must be done to defend the European position in a rapidly changing world economy?
My answer is a simple one. Even the three biggest European States – even the four biggest or the six biggest are under-performers in a world economy that will be defined by China, by India, by Japan, and by the United States. And from the perspective of the United States, my impression is that in the 21st century the United States will have to deal with China and India and control Russia so that Russia is not creating troubles and is no longer seen as a strategic challenge… So the world of tomorrow is defined in a triangle, India, China and the United States. Europe is playing no role there. And if you ask about Europe they say it’s a good place for a holiday.
This reflects the weakness of Europe. But if you look from the Russian perspective, if you look at the way Putin deals with Europe, and if you look at the basic economic facts, Russia is more dependent on Europe than we are on Russia on the basis of our security and energy dependency. But we are disunited. We are weak. We have a common market – I don’t believe we need a common capitalism because what does capitalism mean? It’s a combination of political factors, cultural factors, and basic principles we all appreciate. So, we have a common market, we have a common currency – which is very important – and we accepted a set of rules. But to move forward now and to make the next steps towards a great Europe, we need a more united Europe and a more integrated Europe. Yet I don’t see that this is strongly backed in our democracies.
To sum up, I would say that I can see no reason for changing the basics – the relationship between the welfare system and market economy. We will always be more expensive in the social overhead costs than say the United States. Why is that so? Because without the integration of the broader part of the population, we would immediately create a terrible threat to our political systems as nationalism and populism are still factors that can blow up the whole system. So integration is not only an economic question, not only a moral question but also a political question – at least on the European continent. It may be different in the Islands, in the United Kingdom because historically they have a different position. But from my point of view, it’s not a question that we have to modernise our welfare systems. At my parents’ generation, almost all of them died at around age 60. The good news for my generation is that we will live until 90. But this means a tremendous change in the management of our healthcare system and retirement system. We have to adjust but I would strongly object to moving on to the American model because we are not a frontier society.
We are not a nation built by immigrants.

But on the other hand, the major challenge for us will be how we integrate our different traditions, our successful models into a common European framework. To preserve our traditions we must transform our models into a European consensus, because otherwise we will be underperformers in the world of tomorrow. The fact that we are different is a big asset. The French and the Germans and the Italians and the Poles, we are very different and yet we have a lot in common. To preserve that, we must adjust our systems to the developments of the world outside.
There is a strong competition. For example, if German or French car producers had not diversified to low wage countries, European cars would not be affordable anymore – at least not to the broader population. So these are new processes that we need to adjust to. We need new regulations at the European level and we have new regulations. But in the end the answer is a political one, whether we will move forward to a strong European framework not. If we do move forward, I have a very optimistic view of our future. If we don’t, I am very pessimistic. I am in favour of a strong Europe. The heads of states and governments presented us with a very good draft. There’s hope for the future.

How will we achieve integration with 27 member States?
It’s not a question of numbers; it’s a question of shared principles. If a member State says “We don’t like that. But go ahead and do it.” That’s fine. The new treaty will be ratified then the enhanced cooperation will work. We had great successes in the past – Schengen is one of them; the Euro is another. Think of the situation we would be in if the Deutschmark was still a regional leading currency. We would have terrible problems. The Euro is a great success story and with enhanced cooperation, we can move on. But don’t change the basic principles.
We changed the principles of the stability pact in the past because it was too strict. It’s more flexible now and I appreciate that. But don’t touch the principles of the Euro and the [European] Central bank because it would endanger the whole process.

As international institutions predict an economic slowdown in 2023, Gayle Smith warns of the risks of a recession in developed and developing countries. Fragmentation of the world, increase of extreme poverty and famine, decrease of development aid... Gayle Smith advocates . . .