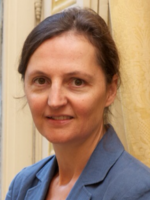 Claire Waysand is interim Chief Executive Officer  of Engie Group since 24 February 2020. She is also Board member of La Poste.

Previously, Claire Waysand was General auditor (Inspectrice générale des finances) in the French Ministry of finance (2016-2019). She had served as chief of staff for Minister of finance and public accounts Michel Sapin (2014-2016), as deputy chief of staff for Prime minister Jean-Marc Ayrault (2013-2014) and as deputy director general of the Treasury (2012-2013).

Trained as an economist (Ecole polytechnique 1988, National school for statistics and economic administration ENSAE and M. Sc in economics at the London School of Economics, 1993, PhD in economics, 1996), Claire Waysand began her career in 1993 at the French institute for statistics (INSEE), before joining the French Treasury in 1997. At the Treasury, Claire Waysand held a number of positions, notably being in charge of European affairs. She was the French representative at the Economic and Financial Committee (EFC) and European Investment Bank (EIB) Board member, from 2005 to 2009. Claire Waysand also worked as assistant director at the International Monetary Fund (2009-2012).