Should the G20 agree to current-account balance targets?

The hard question is how to meet the targets 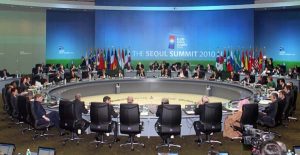 US TREASURY Secretary Tim Geithner has recently proposed that the G20 countries “undertake policies consistent with reducing external imbalances below a specified share of GDP”. Countries “running persistent deficits should boost national savings” and countries with persistent surpluses should “boost domestic sources of growth and support global demand”. The International Monetary Fund would be in charge of assessing efforts, monitoring progress towards the goals set and checking global consistency.

A few days later the European Council (i.e. the heads of state and government of the EU) endorsed a report on economic governance by Herman Van Rompuy, its president. The report calls for the avoidance of external imbalances within the euro area, and it proposes that countries in an “excessive imbalance position” be subject to monitoring, recommendations and ultimately financial sanctions.

The motivations behind these moves differ. The US administration is evidently looking for a way out of the exchange rate gridlock with China. At the same time it remains worried about the extent and pace of the rebalancing of demand between deficit and surplus countries, which Olivier Blanchard, the IMF’s chief economist, has described as too slow. So a monitoring of current accounts is seen by Washington a way both to reframe the discussion with China and to foster a broader global adjustment. The subtext in Geithner’s letter is that first and foremost surplus countries should do more for domestic demand and let their currency appreciate.

The focus in the EU is different. Rather than to monitor the current internal adjustment between surplus countries and deficit countries, the goal there is to reform the rules of the game. In the first ten years of the euro there was a strong belief that only budget deficits are a threat to stability. Current account deficits were not regarded a matter for concern as long as they resulted from private saving and investment decisions. The crisis in Spain, which in 2007 had a 2% of GDP budget surplus and a 10% of GDP current account deficit, proved that this view was wrong. So the primary goal is now to prevent ‘excessive’ external deficits in the future. Surpluses are much less in the spotlight, especially as Germany insists there is nothing wrong with thrift.

Both moves signal a break with the benign neglect culture of the 2000s. Back then, many shared the view expressed by Harvard’s Richard Cooper according to whom, because the US had a “comparative advantage in producing marketable securities”, savers around the world wanted to invest there, which meant that the US deficit and surpluses elsewhere, “although conventionally described as imbalances, [did] not necessarily signal economic disequilibria”. Similarly there was also no shortage of fancy explanations for European external imbalances, for example that everyone in Europe wanted to build a second house on Spain’s beaches.

To recognise that current accounts matter is however only one step. The harder ones are to determine what they should be, how to trigger corrections, and how to deal with the asymmetry between deficits and surpluses.

As to the first issue, economists are adamant they cannot say what a right current account norm is. The very purpose of financial liberalisation is to make national saving and investment decisions independent from each-other. A country’s citizens may want to save because they are ageing or borrow because their income is on a fast growth path, independently from investment decisions. Nowhere is this more apparent than in Eastern Europe, where countries entered the transition to the market with an obsolete capital stock and a skilled labour force. To finance the upgrading of the capital stock through foreign savings, in part in the form of foreign direct investment, was the right thing to do. But to rely on short-term capital flows to finance real-estate investment in the context of rising house prices is questionable. In other words the same deficit can be either perfectly sound or unsustainable, depending on the corresponding savings-investment balance and the composition of capital inflows. Therefore to use current account balances as indicators to trigger a policy discussion is a sensible thing to do, but general, across-the-board targets would not make much sense.

The second issue raises a host of questions about the policy levers that need to be pulled to prompt an adjustment. Unlike the budget balance, the current account balance results from the aggregation of a myriad of individual decisions. To correct it may require fiscal action or changes in the social security system, the structure of taxation, the regulation of product and financial markets and exchange-rate policy, to name a few fields. So the corresponding policy discussion is bound to involve a series of domains, some of which are traditionally regarded as intrinsically national. Here again Europe is interesting: one of the reasons why the EU did not address external imbalances in the early 2000s is that it was politically expedient to pretend that only the budget balance matters, and that for the rest avoid member countries looking over each-other’s shoulder. So for a G20 discussion on current accounts to be fruitful there needs to be a sufficient degree of mutual trust as well as trust in the institution in charge of preparing assessments and conducting surveillance—in this case the IMF. Trust here is still in short supply, at least in Asia.

The third issue is perhaps even more difficult. At any rate, it has not been solved since Keynes raised it in the context of discussions on the post-WW2 system. As deficits and surpluses are the two sides of the same coin, to aim at reducing the ones without doing the same for the others would be a recipe for global recession. In the end lower deficits will necessarily results in lower surpluses, either because of higher demand in surplus countries or because worldwide unemployment is higher. But at the same time it cannot be said that deficits and surpluses are equal threats. The deficit is a threat because capital markets may at some point stop financing it. The surplus is a threat because the country may at some point lose part of its external assets. These are not equivalent developments. But if so, how could the international policy community deal with them symmetrically? This is the problem no one has solved yet. In its internal exercise, the EU is proposing to make use of a range of indicators, some symmetric and some not. The trick is clever, but it still has to pass the test of reality.

The upshot is that to discuss current accounts within the G20 can be a good thing to do, provided (a) rigid targets are avoided; (b) the policy debates is broad enough to involve a wide range of domains and specific enough to pinpoint policy remedies; and (c) a way is found to address surpluses as well as deficits, while recognising that they are not exactly the same thing. This is an uphill struggle for a G20 which this far has not been keen to name the policy actions its individual members should undertake.

As international institutions predict an economic slowdown in 2023, Gayle Smith warns of the risks of a recession in developed and developing countries. Fragmentation of the world, increase of extreme poverty and famine, decrease of development aid... Gayle Smith advocates . . .