This article was written by Robert W. Fogel, Nobel Prize of Economics and Professor at Booth School of Business, University of Chicago and NBER, at the occasion of his participation to Les Rencontres Economiques d’Aix-en-Provence 2009 “Growth, Demography, Finance: from Major Economic Breakdowns to New Balances” 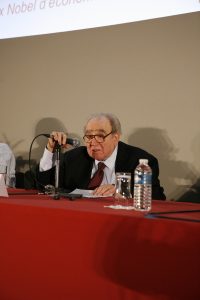 During the next generation, OECD nations will be faced with four principal challenges. These are:
1. The emergence of China and India as the dominant globalmarkets and, hence, principal shapers of the global economy.
2. An average increase in life expectancy among OECD nations by over two years per decade.
3. A shift in the structure of consumption that will have a major impact on the economic structure of OECD nations.
4. The rapid aging of the populations of the OECD nations, which will have profound effects on culture.

Changes in the Global Balance of Income and Power
In the year 2000, the global economy was dominated by six groupings of countries: the United States, the European Union (which then consisted of 15 countries [EU15]), India, China, Japan, and a group of six Southeast Asian countries (Singapore,Malaysia, Indonesia, Thailand, South Korea, and Taiwan [SE6]). As measured by gross domestic product (GDP), these six groupings accounted for 73% of the world’s economic output and 57% of the global population. The balance of the world (including Latin America, Africa, and Eastern Europe) accounted for about 28% of GDP and 42% of the global population.