Transforming France for dynamism and inclusion

The Nobel Prize of Economics and Professor at the university of Columbia Edmund Phelps gives his insight of France during his participation to Les Rencontres Economiques d’Aix-en-Provence 2007 on the Theme : “Which capitalism for the 21th century ?”

Read the full article in pdf 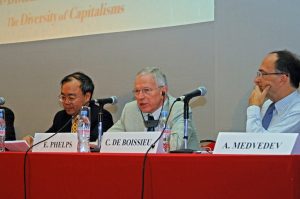 First, let me say that this is my second time at the Aix meeting of le Cercle des économistes and to me this program is particularly exciting: my personal experience suggests that there are changes going on in France. In the year 2000, Jean-Paul Fitoussi had the courage to invite me for a public lecture under the auspices of Sciences-Po on the subject of capitalism.When I arrived at the lecture room there were just 5 people there and that counts Jean-Paul and my wife, Vivianna and myself! In the year 2004, at the Sorbonne, at an event thatChristian de Boissieu had something to do with, there were about 500 students there. So I am thrilled that in 2007, capitalism is the subject of a whole conference.

I don’t like this terminology of many capitalisms, if one object is different in some very important way, it deserves a separate term. We would all do better calling different objects by different names. I was surprised to hear the expression – by Patrick Artus – that Europe has a powerful capitalism. It may have a powerful corporatism but I don’t see that it has a powerful capitalism. If we know anything about the world out there, it is that there is amarked dearth, relatively speaking, of innovation and perhaps a tendency to innovate in poor directions on theWestern Continental Europe compared with those three or four countries that we think of as examples of capitalist systems.Thatmay help to explain why themoney keeps running uphill to the US, adding to the already large current account deficit.
In the past 25 years, economic policy in Europe, and to some extent in the United States as well, has been in a rut. The political party currently in power says that it favours faster economic growth, and that therefore it’s raising tax rates, spurring investments, and so forth; then the next party says that it favours economic growth so it’s going to lower taxes and move in the opposite direction because things were not well under the previous administration.
So you tend to get these swings back and forth and always the political parties are pushing certain standard buttons, tax rates being the best example, but sometimes various government expenditures; every government has strong views on education although often they don’t actually do very much about it…
It seems to me that for these last 25 years, what we have needed is for political parties to act pragmatically and look at particular, relatively well defined problems and proceed imaginatively and constructively to think of all the things that could be done. and choose among all the things that might be done some of the best things to do that will really solve that problem. In particular, what we have to do is to abandon social thinking in terms of left vs right, it leads absolutely nowhere.
Another defect of political discourse in recent decades, I think, is that the objectives are always specified in very superficial terms: the unemployment rate must be set at a lower level, investment expenditures are not to be increased, maybe R&D.What is central, I think, is whether the economy is poorly instituted or well instituted from the point of view of what is basic for a good life and a good economy. For me, what is basic for a good life is personal growth, intellectual challenge, stimulation. You hope that a good economy will exhibit a low unemployment rate and if it doesn’t, you will re-examine what you are doing; but you want the best structure of the economy you have and let the statistics for the year come out as they may.
For me, the two intermediate level attributes of a good economy are dynamism and inclusion. You have an economy that’s dynamic then most people are going to have interesting jobs, be engaged in their jobs, experience personal growth, and so forth. And if it’s inclusive, a large number of people will have access to that kind of a life.
The issue I think, is not whether the US system is to be preferred to the French system, but what in the US would be good to have and what is to be avoided.

In the United States
United States has very poor corporate governance. I am told that if you buy a company, it may be months, sometimes years before you can get a shareholders’ meeting. And we know that the CEOs get away with murder from the corporate boards.United States economy suffers tremendously from over investigation just as European economy suffers so much from over regulation. And then there are also the self appointed advocates who are extorting tributes from the corporations all the time. There is a big down side to US capitalism.

In Europe
With regard to reforms in ContinentalWestern Europe, and perhaps what I am going to say applies to Latin America as well, I would say that the overhaul of the labour code,which is what is expected to be undertaken in France, will help to raise employment and in that way it will do something for inclusion too, – and I don’t mean to dismiss it – but it will not be transformative ; it will not by itself turn the economy to one of dynamismby which Imean high rates of innovation in the right directions. I think that in Continental Western Europe, the cultural fabric is hugely antagonistic to dynamism. If that’s right, it’s not going to matter enormously whether you fiddle a bit with the dials on the regulatory fronts,much as such actions may be desired. I have several small points to make along those lines:
– Companies tend to some extent to be operated as social clubs.Connections are important, nepotism is not uncommon. One theory of that is that the CEOs in Europe or in Latin America are not paid enough to stop it.
–Working harder than others or accepting a risk is considered anti-social and looked down at, “Don’t get ahead of the others” or “Don’t try to get ahead of the others” at any rate.This has always been a problemin Europe: Emmanuel Kant said – thinking no doubt of Europe though he did not put it that way – “Envy is the vice of mankind.”
– Inherited wealth is accepted in Europe no matter how disproportionate it may be, while the efforts of start-up entrepreneurs in the commercial world are seen as money grubbing. In Latin America some business people have told me that a manager of an already profitable company shies away from an innovation that might make huge profits for fear that such profits might excite populist attacks by politicians, labour unions, and so forth. I don’t whether that was ever the case in Europe or whether it is the case now, but I do recall that in the recent election campaign it was said that companies that are already profitable ought not to engage in cutting inflated costs by means of down sizing: “If you have some profits, that should be enough for you.”Well of course that’s almost a recipe for underachieving in the area of innovation and having an exciting economy.
Because of such cultural drag, I would say that there exists no universally best system across time and across countries. The most general point I would make is that a country whose economic culture favours capitalism would not possess the economic institutions and the cultural attitudes required for a well functioning corporatism. If they wanted to go in that direction, they would not be able to go there on day one. Likewise a country whose economic culture favours corporatism can’t go in one jump to a capitalist system. But neither of those observations tell us in what direction a country ought to bemoving. I think that what we are seeing now is that there is an agreement in most countries, among corporatist countries that they ought to be taking steps to evolve in the direction of more genuine capitalism and I think that’s all to the good.